A stone statue of Bato Kannon is standing along the old Kawagoe way between Owada and Nobidome. The Bato Kannon with three heads and six arms which was built in 1696 is called Onikage-sama by the locals, and carries on a legend of a famous horse named Onikage.

Once upon a time, there was a man named Oguri in Chichibu who hurried to get to Edo riding his beloved horse, Onikage, for an urgent business. When they got to Owada, even Onikage, a great horse, looked tired and stumbled over the root of a huge pine tree and fell down. However, being a great horse, Onikage got up immediately and carried its master to the destination. When the master came back to the place where he had left his horse after finishing his job, Onikage, who was supposed be there, was nowhere to be found. Oguri found it peculiar but had no choice but to hurry himself to get home. When he got to Owada, he found the remains of Onikage where his beloved horse had fallen down on their way. The spirit of Onikage kept running to help its master with his emergency. The villagers later built the Bato Kannon to enshrine the spirit of Onikage. This is the legend of Onikage. 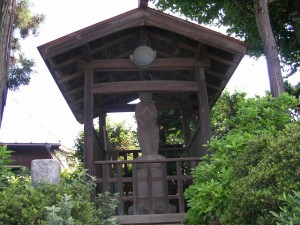 Show a bigger map to see the Bato Kannon of Onikage