Hachimanzan Midain Mangyo-ji Temple is a temple of the Chisan sub sect of the Shingon sect, and while the year of foundation is unknown, it used to be in Juniten village and was famous for having Shichido-garan not only Hachiman-sha but also more than 30 temple buildings and 300 associated buildings. The temple was relocated at some point, and the neighborhood area started to be claimed as the Nodera village.

“When people here and there hear the sound of the bell of Nodera in Musashino, they hurry on their way” (Ariwara no Narihira/825-880)
“Ask a question to Nodera that I heard of and look down on my feet, but there is no response in the evening” (Doko Jugo/1430-1527) 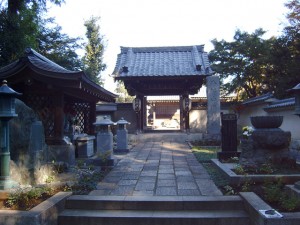